Lights up On Washington Heights... 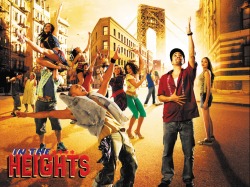 In The Heights tells the story of a group of friends and family in a New York community called Washington Heights. As they all struggle in this poor neighborhood with 'paciencia y fe', Usnavi and his friends take you through a wonderful story of self-discovery and what home really means.

It played its first Broadway performance at the Richard Rodgers Theatre on February 14, 2008 and celebrated its Opening Night on March 9, 2008. It proceeded to win the Tony's for Best Original Score (Music and/or Lyrics) Written for the Theatre, Best Choreography, Best Orchestrations, and Best Musical in 2008


With it's Latin and Hip-Hop flavors it was unlike anything on Broadway. The music is outstanding, the characters are engaging, and the story will touch your heart.

Please enjoy the lyrics from the show.